After five years of constant (ab)use, my good old MacBook Pro 13" started to randomly crash. It was diagnosed with a broken main board only a couple of days before December 25th, and the estimate repair bill of 971 Euros became just the perfect excuse to make myself a nice christmas gift.

Recently trying to become more independent from proprietary software, I decided not to go with Apple's Mac OS X for the first time since 2001 but to take this as an opportunity to switch entirely to GNU/Linux. This left me with a wide variety of hardware options, and even though Linux runs reasonably well on Apple notebooks, I didn't buy another Apple machine but a Lenovo Thinkpad X1 Carbon. 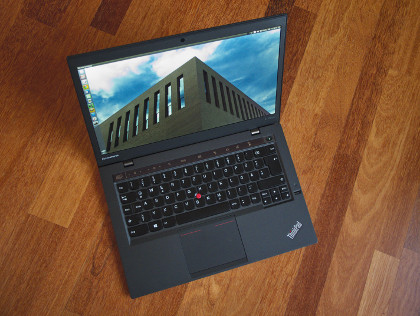 The X1 Carbon is Lenovo's answer to Apple's MacBook Air: it is very thin and lightweight and comes with an SSD harddisk but no optical drive. Other than the Air, you can buy the X1 with an optional touch display. But after having a closer look at it at a Lenovo retailer, I decided to go with the matte non-touch WQHD panel instead, because the touch display has a glossy surface which is covered with a semi-matte film that seems to negatively affect both the brightness and the sharpness of the screen (this is briefly discussed in this video). From the different hardware configurations available, I picked the model with Intel's i7 CPU, 8GB of RAM and a 256GB SSD.

Being an Apple user for about 15 years, the X1's look and feel is quite unusual for me. On the upside, it comes with a beautifully designed, lightweight and robust body as well as a perfect keyboard. Many reviewers have complained about the adaptive row of F-buttons and the unusual layout - but to be honest, it took me only a few hours of typing to get used to the missing Caps Lock and the weirdly placed Delete key. In terms of key spacing, key travel, noise emission, and responsiveness, it is at least as good as Apple's MacBook Pro keyboards, maybe better.

I also like the clean, understatement look of the X1. I'm not sure whether this is Lenovo's very own interpretation of "timeless" hardware design or the beginning of a 90's retro design hype but the anthracite body and the black plastic keys are just a perfect match to my 1991 Technics HiFi. 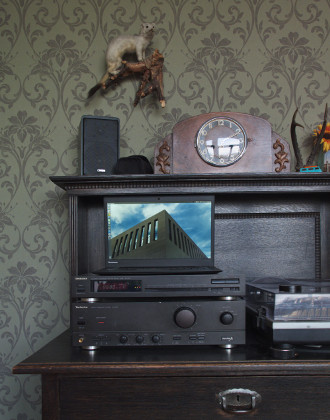 On the downside, the X1 comes without an SD-card slot. Sure, this machine is not the first choice for professional photographers, but everyone who is used to import photos on-the-go will find it annoying as they will have to carry a USB cable for their camera all the time. I already know that I will miss this feature a lot. Another weird detail is the matte-black trackpad. It is well-sized and looks great but feels rather cheap compared to Apple's glass touchpads. To be honest, it's kind of hard to understand why someone would put such a thing to an 1800 Euro top-of-the-row product. It works OK, but lacks some precision even with the original driver software in Windows. Of course there are much worse trackpads - such as the hideous three-button pad on the Dell M4600 I'm using at work - still, Apple seems to be lightyears ahead both in trackpad hardware and software.