After installing Ubuntu, the following hardware works out of the box:

The X1's keyboard does not have the usual F-keys but a touch-sensitive strip at the top of the keyboard. In Windows, the strip will display different function "keys" depending on which software is used (hence the name "adaptive" keyboard). In Ubuntu, the functions do not change automatically, but the user can manually switch between two modes.

The first mode provides F-keys (F1 - F12), wireless on/off, display mode, keyboard backlight, and settings. All keys work except for the wireless switch and the settings key (I didn't have the opportunity to test the display mode switch). 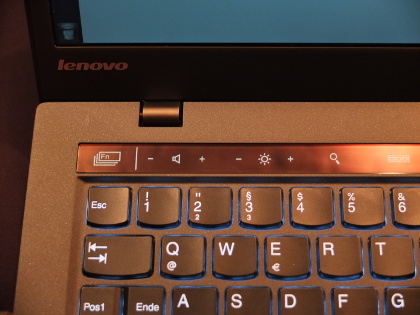 In Microsoft Windows, there are two additional modes ("Web Browser Mode" and "Web Conference Mode"). These are not available in Ubuntu.

Ubuntu's "Unity" desktop works out of the box, but everything is very tiny due to the high resolution of the display. Unity supports interface scaling, which can be found in the System Settings:

The following parts do not work out of the box:

Maybe it's not a good idea to use biometrical sensors to unlock your computer. As hacker "Starbug" just recently demonstrated, fingerprints can be stolen even with ordinary photo cameras. If you want to use the X1's fingerprint sensor anyway, these instructions are the way to go. I tested it and it works, but the software is rather unreliable and crashes a lot, sometimes already during system startup.

In general, Ubuntu runs great on the X1 Carbon. System stability can be compared to Microsoft Windows: A few minor errors here and there, but nothing serious. Still, compared to Debian and especially to Apple's rock-solid OS X, some issues are unusual and a bit annoying:

Continue to Part 4: Optimizing the System