After installing Ubuntu on the X1 Carbon, a few things need to be done to get things to work properly. These steps depend on your personal preferences and may be skipped.

As I really dont need certain applications on my computer, I removed the following software by selecting it in the Ubuntu Software Center and clicking the "Remove" button:

Ubuntu has been criticized for sending local search requests to web servers. This feature can be deactivated by switching off Ubuntu Settings > Security & Privacy > Search > Include online search results: 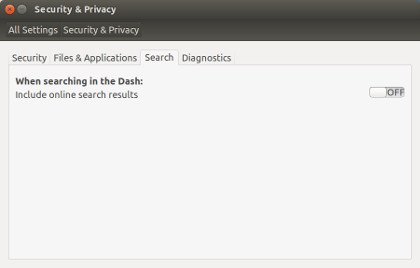 In addition, I ran the script provided by Fix Ubuntu. It disables remote search scopes and blocks connections to Canonical's product search servers. Finally, I installed dconf-tools to get rid of annoying suggestions from the Ubuntu Software Store in my local searches:

In the editor window, uncheck "display-available-apps":

As a substitute for the removed Flash plugin, I installed Google Chrome (not Chromium) on my Computer. Chrome has its own Flash plugin integrated and does not rely on the system-wide plugin. This way, I now have my standard browsers (such as Firefox) without Flash support and therefore not affected by Flash cookies and Flash tracking. If a website needs Flash to be properly displayed, I can still watch it in Chrome.

I also installed some other stuff that I felt I would need sooner or later:

Finally, I started to test different programs for importing and/or editing photos (namely Krita, Darktable, Photivo, and GIMP) to find the best possible substitute for Photoshop. But image manipulation in Linux is a long story, so maybe we'll come back to this later.

There are still some things left to do:

Overall, it took me about three days to get to a system that is capable of most things that any Mac can do out of the box. Anyway, we're talking about free software here - the majority of the programs I now use are open-source and all of them are free (as in free beer). Independence comes at a price, and when it's just a couple hours of my spare time, I'm willing to pay. The open-source community is alive and active and provided solutions to any problems I faced during installation. Maybe this guide will help others who are willing to switch.